Property website that is emerging in South Africa: Joburg Homes

What causes the high rate of teenage pregnancy in South Africa? (6617)

Eight years of research in low-income neighbourhoods of Nairobi have opened my eyes to the significant role of school, family and community partnerships. Not only are they crucial for student achievement, they can narrow the performance gap between children in high and low income settings.

My work in Nairobi confirms findings from research that stretches back over two decades in different contexts. For instance, renowned Harvard social analyst Lisbeth Schorr observed in her book that social programmes taken to scale resulted in the transformation of poor neighbourhoods and communities.

The positive results suggest that a host of positive outcomes can be achieved when communities partner with schools.

My research showed that forging a partnership between family, community and school enables parents to take part in the academic success of their children. Parents acquire knowledge, skills and confidence for better parenting. This in turn enables them to improve their economic lot and become better citizens. 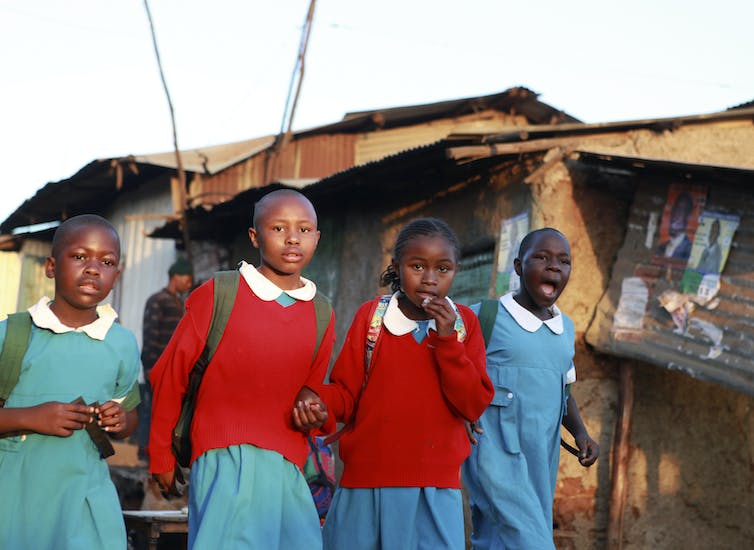 Pupils from Kibera, one of the largest slums in the Kenyan capital Nairobi.
Reuters/Noor Khamis

The three-way partnerships also contribute to social capital. Social capital refers to relationships among and between different actors for the purpose of achieving a common good. Therefore, the partnership between family, community and schools improves the interconnections between the institutions. This in turn enriches the relationships between parents and their children for academic success.

Schools can also draw on resources external to them – the families and the community – to bridge any challenges they may face in the way of the children’s education.

As a result, parents are thrust to the centre of this relationship as a resource for the improvement of their children and the schools. Parents cease to be distant observers who are far removed from the education of their children. Families can draw from these new networks to enable their children to succeed in school.

My work over the past three years revolved around the practical application of this paradigm shift in two informal settlements in Nairobi under the “Improving Learning Outcomes” project. The two relatively poor urban settlements of Korogocho and Viwandani had poor learning outcomes at primary school level and low transition to secondary school.

Understanding the reasons for this and designing interventions was a major part of our project.

The positive association between the involvement of parents and student achievement has consistently been documented by scholars for some time now. Parental involvement includes communication with teachers and others working in a school, helping with school work at home and volunteering at school. Attending school events, such as parent-teacher meetings and conferences is also important.

The main interventions during our research in Nairobi included:

Parents believed that interacting with teachers was important because it helped reduce the probability of children becoming truant. They also counted on interaction with teachers to reduce instances of peer pressure.

The community leaders support for girls’ education persisted over the course of our three year work. This was particularly evident in their support to the parental component of the intervention. The community, built a supportive relationship on education and understanding the social change and peer pressure faced by the youth.

The result was improved learning outcomes, particularly in numeracy where girls recorded a 20 percentage point improvement in scores. There is also evidence that girls who participated in the programme had higher educational aspirations, with a substantial proportion of girls whose highest education aspiration was completing secondary school aspiring to acquire university education.

Transition to secondary school rates in Korogocho and Viwandani among the 2013 cohort of girls who participated in the project stood at 68%. This was a 22% improvement over the 2010 statistic of 46% (both girls and boys). Although the rate was still lower than the national average in 2010 by 9 percentage points, it represented a much reduced gap between urban slum children and the national average.

Among those girls who made a transition to secondary school in 2014, three girls joined prestigious girls’ national schools. National schools are the best-resourced and admit the highest performing students from across all counties in Kenya.

In 2015, three girls from Korogocho who qualified for the subsidy to join secondary also went on to qualify for a prestigious scholarship programme which targets gifted but economically and socially marginalised students.

Our findings show that the education outcomes of young people can be improved with targeted interventions. At the centre lies the participation of partners – community, family and schools.

This article is republished from The Conversation under a Creative Commons license. Read the original article.

What causes the high rate of teenage pregnancy in South Africa?

Africa should be building private-public partnerships in education

Racism is still rife in South Africa’s schools. What can be done about it

Fake qualifications are on the rise. How universities can manage the risk

What causes the high rate of teenage pregnancy in South Africa? (6617)